The “Original Braunvieh” or “Montafoner Braunvieh” represents the old type of Braunvieh before Brown Swiss was induced via AI. Their areas of origin are Switzerland, Vorarlberg, Tyrol and Southern Tyrol and the Allgäu in Germany. In the 19th century the “Original Braunvieh” originated from different native breeds. The first herdbook was founded in Switzerland in 1857. Regulations for herdbook-keeping of the Montafoner Braunvieh were published in Vorarlberg in 1896. In 1869 exports to America started. There it was named Brown Swiss and the focus was more on the milk yield. Via AI Brown Swiss was introduced in the original population in Austria, Switzerland and Germany from the 1960ies on, which led to a replacement of the Original Braunvieh. In 1990 the conservation program in Austria started. Today Orginal Braunvieh is a separated breed. Especially in Vorarlberg and Tyrol Original Braunvieh can be found in suckler cow herds. The relatively high milk yield and it’s suitability for alpine climate proofs to be an advantage in this regions. 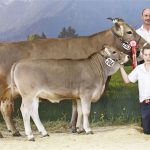 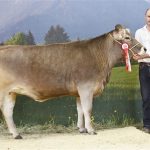