The Murbodner breed goes back to the 18th century, when the Mürztaler cattle was crossed with other Blondvieh breeds and old pied cattle. In 1869 the Murbodner was approved as native breed.  A strong focus was on the drafting ability of the bullocks and the beef performance. The breed spread out in Styria, Upper and Lower Austria. After World War II it was replaced mainly by Fleckvieh and a lot of the Murbodner were crossed with Gelbvieh. In 1982 the Austrian Association for
Rare Endangered Breeds started the conservation programm. In 2002 63 herdbook cows where undergoing beef performance recording, in 2015 it was the biggest beef breed with 5.412 cows.  The rise in the last couple of years can be traced back to the fact that a marketing label with a supermarket was established in 2007. Bullocks and also heifers are sold after weaning from the farmers (a lot of them based in the mountain regions) to fattening farms. Cull cows are also marketed via this label.

Their coat color varies from yellow to reddish. Typical is the black pigmented muzzle with a nonpigmented snip in the middle and black hair at the tail-end and the end of the horns is black as well. Bulls are usually darker and their neck is often almost black. 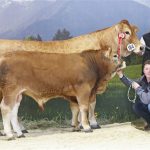 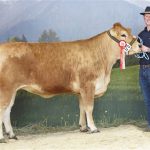 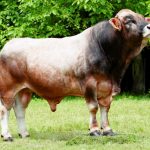