The breed most probably goes back to cattle brought by settlers from the Near Eastern region about 1000 B.C. Those cattle were crossed with various other breeds over the centuries which led to three country breeds, which were named according to the regions Oberinntaler, Lechtaler and Wipptaler cattle. At those times a lot of grey cattle were crossed with Braunvieh. Breeders of the Tyrolean Grey were worried that could lead to the replacement of their breed. In 1908 the first regional Tyrolean Grey society was founded. After WWI more regional clubs were established and in 1922. In 1924 they were merged to the Tyrolean Grey breeding association and in 1933 the breeding objective was defined. Unlike other breeds Tyrolean Grey has not been crossed with other breeds after World War II. In 1977 a program for the use of natural mating and AI bulls was formed. At the beginning of the 90ies the use of Tyrolean Grey for suckler cow husbandry started and a marketing program for purebred bullocks was created. Until today Tyrolean Grey is considers as a dual purpose breed which is suited for dairy and beef production. Like other native Austrian breeds they are especially suited for extensive production due to their hardiness. Today Tyrolean Grey is bred in different countries like Switzerland, Italy and Germany, but also in Estonia, Denmark and other countries. 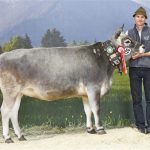 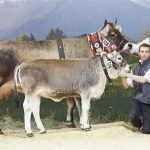 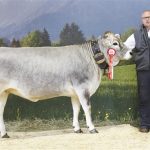