The indigenous breed has its name from a valley of the river Enns. According to scientific publications their origin can be traced back to ancient celtic cattle. In the 18th and 19th century they were quite popular in the regions around Styria, Upper Austria and Lower Austria. They were known for their meat quality (especially the marbling) and were even exported to London at those times.

But they have been replaced by other, mostly bigger and sturdier cattle (like the Murbodner and Pinzgauer) and Ennstal pied cattle were only kept in two Styrian districts (Murau and Liezen). Later most of the Ennstal pied cattle were crossed with Simmental. In the 1990ies only 4 non-related lines existed. They were the foundation of the conservation program, which started in 1992 with only about 20 cattle. The population increased over the years up to 400 cattle, but they are still considered as highly endangered breed.

The breed is small to middle framed and rather fine-boned. Therefore they are especially suited for mountain regions. They are mainly white colored with reddish-brown spots on the upper legs, chest and flank. 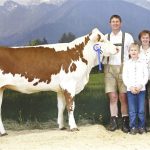 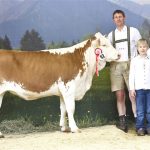